50th Anniversary of the Man on the Moon 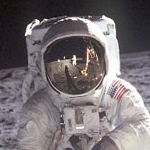 Featured Content July 16, 2019 - One of the most historically significant moments in our Nation’s history: the landing of a man on the Moon!

On May 25, 1961, President John F. Kennedy addressed Congress and the Nation saying, "I believe that this Nation should commit itself to achieving the goal, before the decade is out, of landing a man on the Moon and returning him safely to Earth." See the President's full address, a Special Message to Congress on Urgent National Needs, including support for the Nation's space program, as printed in the Congressional Record (107 Cong. Rec. (Bound) - House of Representatives).

On the day of the launch, President Richard M. Nixon honored the mission and proclaimed: 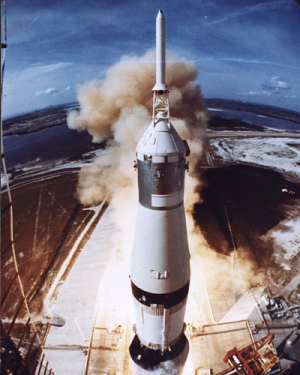 "Apollo 11 is on its way to the Moon. It carries three brave astronauts; it also carries the hopes and prayers of hundreds of millions of people here on Earth, for whom that first footfall on the Moon will be a moment of transcendent drama. Never before has man embarked on so epic an adventure."

At 4:18 p.m. on July 20, Neil Armstrong's voice could be heard through the speakers at NASA's Mission Control in Houston. He said, "The Eagle has landed." This referred to the Lunar Module named the Eagle landing on the moon. An estimated half a billion people watched a live broadcast of the landing and listened intently as Armstrong famously describe taking "...one small step for a man, one giant leap for mankind."

President Nixon's 1969 Public Papers contain the July 20 Telephone Conversation with the Apollo 11 astronauts on the Moon (p. 530), and July 24 Remarks to Apollo 11 Astronauts aboard the U.S.S. Hornet following completion of their Lunar Mission (p.541).

HERE MEN FROM THE PLANET EARTH

FIRST SET FOOT UPON THE MOON

WE CAME IN PEACE FOR ALL MANKIND

While Armstrong and Aldrin landed on the Moon, the third astronaut, Michael Collins, had an arguably even more important job. He was responsible for piloting the command module, continuous monitoring, being ready to rescue the astronauts if need be, and picking up the other two astronauts to go back home at the end of the mission. Though he didn't land on the Moon and is often known as the "Forgotten Astronaut," Collins was needed to operate the Command/Service Module. (Source: Nasa.gov )

Because no one knew what kinds of things may be living on the Moon, when they returned to Earth, Armstrong, Aldrin and Collins were taken into quarantine to prevent any possible contamination of micro-organisms from the Moon. Check out the July 15, 1969, contamination proceedings as printed in the Congressional Record (115 Cong. Rec. (Bound) - Senate).

Source for this article except where specifically noted is Apollo 11 Mission Overview on Nasa.gov.