A timeline of GPO's history of providing online access to electronic government information. 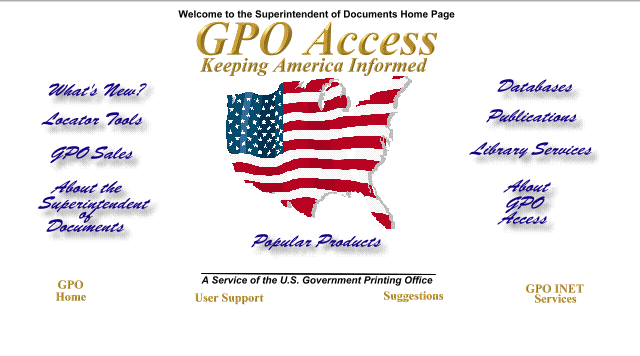 December 1995- GPO Access became free to all users. Previously, GPO Access was only available by subscription but free to Federal depository libraries.

June 1998- GPO Access was named one of just 15 ‘‘Best Feds on the Web’’ by Government Executive magazine.

1999- GPO Access was selected as one of the top 50 legal research web sites for 1999 by Law Office Computing magazine, and was named best research site for laws and best Government site overall by the newsletter legal.online. It was also chosen as the first recipient of the American Association of Law Libraries (AALL) Public Access to Government Information Award. GPO and DOE jointly earned a Hammer Award from Vice President Gore’s National Partnership for Reinventing Government for the ‘‘Information Bridge,’’ a project that made available thousands of unclassified DOE scientific and technical reports in electronic image format via GPO Access. 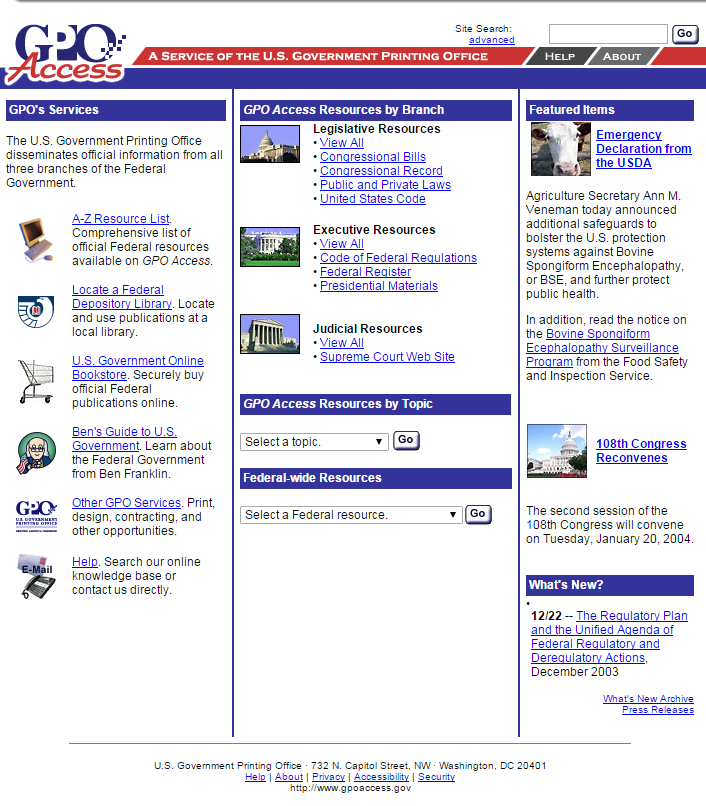 April 2003- In response to user feedback, GPO unveiled a major redesign of GPO Access. This interface introduced a consistent design and a means of navigating throughout the site.

May 2003- GPO formed a working group to begin to transform GPO into the digital age. During 2003-2004, GPO gathered research and information in an initiative to create a state-of-the-art digital platform for ingesting, storing, authenticating, and providing public access to Government information. This system was eventually named the Future Digital System, or FDsys for short.

August 2003- The National Archives and Records Administration (NARA) and the Government Printing Office (GPO) signed an agreement to establish an affiliated relationship. The agreement, which was amended in 2012, ensures that the documents available on FDsys, the GPO web site that provides free online public access to more than 250,000 federal government titles, will be available permanently. Although other affiliated archive agreements evolved over time to include electronic records, this agreement was the first of its kind between NARA and another government agency to specifically address electronic government records.

August 2006- GPO announces development of “a world-class Future Digital System” as a “major step towards ensuring the American public has a one-stop site to access Government information that is authentic, version-controlled and permanently available.”

January 2008- GPO authenticates the first ever online Budget of the U.S. Government (FY 2009) by digital signature. 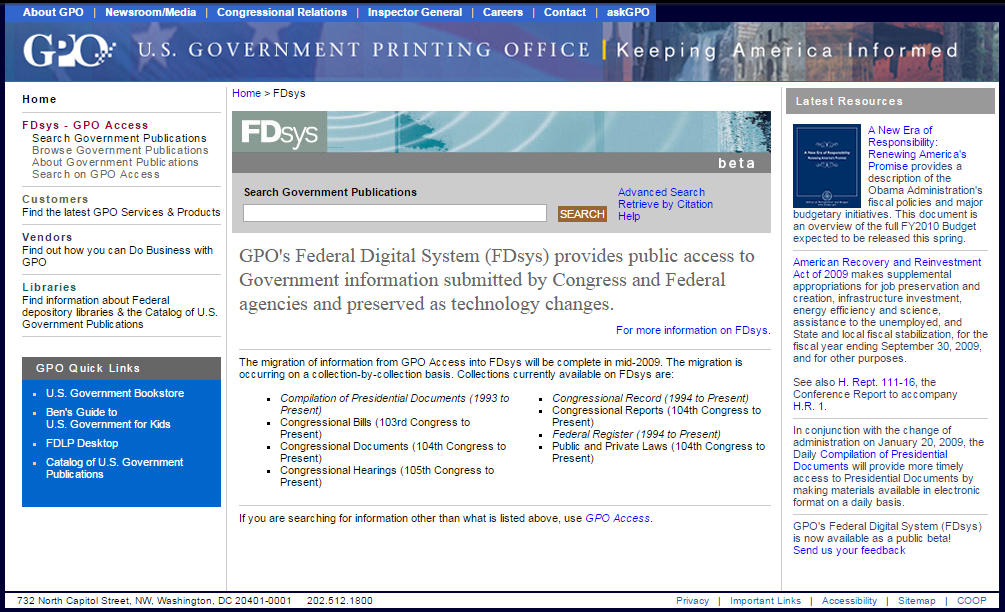 October 2009- GPO and NARA worked together to convert the test of the Federal Register into XML format for bulk download through the FDsys bulk data repository, making it GPO’s first XML bulk data set.

October 2011- The U.S. Courts Opinions collection launched on FDsys with 3 courts. A total of 29 courts were made available by the end of FY12.

January 30, 2012-The first FDsys audio content, the JFK Flight Deck Audio Recording, was made available on behalf of NARA.

February 7, 2012- FDsys achieved record number of visits totaling more than 140,000 to the site over a five-day period. This record was accomplished after GPO supported NARA in releasing the post-President Kennedy assassination audio tape recording on FDsys the previous week.

March 2012- GPO Access was sunset and redirects to FDsys were enabled.

May 2013- FDsys reached a milestone of 500 million retrievals of content.

September 2013- Enhancements made to the Constitution Annotated, which was released as a digitally-signed, searchable PDF with linked table of contents, table of cases, and index along with GPO's Seal of Authenticity on every page. Mobile Member Guide App for the 113th Congress made available.

February 3, 2016- GPO launched the redesigned govinfo website in beta. govinfo functionality enhances the way stakeholders can interact with the site, strengthening GPO’s position as the central location for access to Federal government information. In addition to a redesigned, mobile-friendly website with a modern look and feel, govinfo offers key enhancements including: