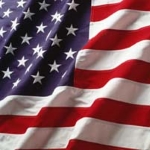 National Volunteer Week was first established in April 1974 by Presidential Proclamation. Each year, National Volunteer Week celebrates millions of Americans dedicated to volunteerism. In appreciation of this nationally recognized observance, this article provides a select history of significant events related to national service.

"I urge all Americans to observe that week by seeking out an area in their community in which they can give to a needy individual or a worthy cause by devoting a few hours, or more, each week to volunteer service."

President Franklin D. Roosevelt establishes the Civilian Conservation Corps (CCC) by Executive Order on April 5, 1933. Read the President’s message to Congress regarding creation of the CCC as printed in the Congressional Record on March 21, 1933.

"I propose to create a civilian conservation corps to be used in simple work, not interfering with normal employment, and confining itself to forestry, the prevention of soil erosion, flood control, and similar projects. I call your attention to the fact that this type of work is of definite, practical value, not only through the prevention of great present financial loss but also as a means of creating future national wealth."

President John F. Kennedy establishes the Peace Corps within the Department of State by Executive Order on March 1, 1961.

Executive Order 10924 as printed in the Federal Register Volume 26, Issue 40

The Peace Corps Act is approved later this year to authorize funding.

Read Senator Humphrey’s remarks on introduction of the legislation and a letter from President Kennedy to Congress as printed in the Congressional Record.

President Lyndon B. Johnson creates VISTA (Volunteers in Service to America) as part of the Economic Opportunity Act of 1964 "to perform duties in furtherance of programs combating poverty at a State or local level."

The ACTION agency is created on July 1 to "consolidate and administer the Nation's federally sponsored volunteer programs, which include the Peace Corps, VISTA, the Foster Grandparent program, and the SCORE/ACE program, a corps of volunteer small business counselors.”

The Domestic Volunteer Service Act of 1973, the authorizing legislation for ACTION, is enacted.

The National and Community Service Act of 1990 is signed into law to enhance national and community service, and for other purposes. 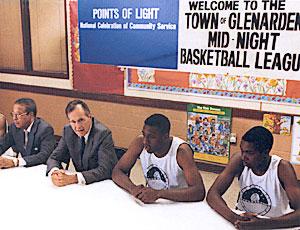 President George H.W. Bush references "a Thousand Points of Light" in his January 29, 1991, State of the Union Address.

"We can find meaning and reward by serving some higher purpose than ourselves, a shining purpose, the illumination of a Thousand Points of Light…We all have something to give."

National Civilian Community Corps (NCCC) is created as part of the 1993 Defense Authorization Act as a demonstration program to explore the possibility of using post-Cold War military resources to help solve national challenges.

The NCCC is governed by 42 U.S.C. Division E 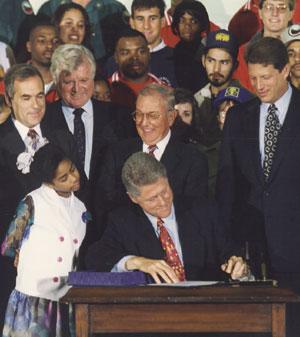 In September 1993, President Bill Clinton signs the National and Community Service Trust Act of 1993 "to establish a Corporation for National Service, enhance opportunities for national service, and provide national service educational awards to persons participating in such service."

Congress passes the King Holiday and Service Act of 1994, on August 23, 1994, charging the Corporation for National Service with taking the lead in organizing Martin Luther King Day as a day of service.

"[Dr. King] dedicated himself to what was in his time and what remains the most difficult challenge we face as a democratic people: closing the great gap between our words and our deeds." 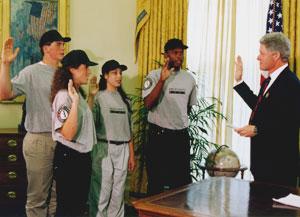 In September 1994, President Clinton swears in the first class of AmeriCorps volunteers.

"Service is a spark to rekindle the spirit of democracy in an age of uncertainty…[it] comes down to three simple questions: What is right? What is wrong? And what are we going to do about it? Today we're doing what is right."

On June 18, 1997, Congress approves the Volunteer Protection Act of 1997 "to provide certain protections to volunteers, nonprofit organizations, and governmental entities in lawsuits based on the activities of volunteers."

"Through citizen service, Americans recognize that we are responsible for one another and that we are members of a true community."

On February 4, 2002, President George W. Bush establishes the USA Freedom Corps by Executive Order "to foster a culture of responsibility, service, and citizenship by promoting, expanding, and enhancing public service opportunities for all Americans and by making these opportunities readily available to citizens from all geographic areas, professions, and walks of life."

"My call tonight is for every American to commit at least 2 years, 4,000 hours over the rest of your lifetime, to the service of your neighbors and your Nation."

President Bush creates the President’s Council on Service and Civic Participation by Executive Order on February 3, 2003, with the mission to "encourage the recognition of outstanding volunteer service and civic participation by individuals, schools, and organizations and thereby encourage more such activity, especially on the part of America’s youth; and facilitate awareness of the ways in which Americans throughout our history have helped to meet the vital needs of their communities and Nation through volunteer service and civic participation."

On February 25, 2009, a hearing is held before the Committee on Education and Labor: Renewing America Through National Service and Volunteerism.

"We need your service right now...I’m asking you to help change history’s course...And if I—if you do, I promise you, your life will be richer, our country will be stronger, and someday, years from now, you may remember it as the moment when your own story and the American story converged, when they came together, and we met the challenges of our new century."

"Twenty-three years ago, President George H.W. Bush began a tradition. He knew that across the country every day, Americans were finding ways to serve each other and give back to their communities, often with very few resources and very little recognition...he knew that their spirit of service was vital to our national character. So he created an award, the Daily Point of Light Award, to recognize Americans who serve their neighbors and communities in innovative ways that inspire us all."