Anniversary of the Establishment of the Peace Corps 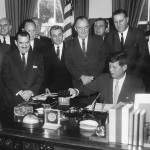 "Nothing carries the spirit of American idealism and expresses our hopes better and more effectively to the far corners of the earth than the Peace Corps."


The Peace Corps is a volunteer program run by the United States government sending American volunteers to developing countries to assist with health care, education, and other basic human needs. Established by Executive Order 10924 and issued by President John F. Kennedy on March 1, 1961, the program was announced by a televised broadcast on March 2, 1961. Then with authorization by Congress on September 21, 1961, the Peace Corps Act was passed.

The Peace Corps' Mission Is to promote world peace and friendship by fulfilling three goals:

This year, Peace Corps week is February 25 - March 3. During this week the Peace Corps community acknowledges and celebrates the way that Peace Corps makes a difference at home and abroad and renews its commitment to service. This year's Peace Corps Week theme is "Highlighting Home: What does home, family, and community look like in your Peace Corps country?", and they are celebrating host families and places that volunteers call home during their service.

View Executive Order 10924 (Establishment of the Peace Corps) in the March 2, 1961 issue of the Federal Register, now available on govinfo.
PDF Details

75 Stat. 612 - An Act to provide for a Peace Corps to help the peoples of interested countries and areas in meeting their needs for skilled manpower
PDF Details