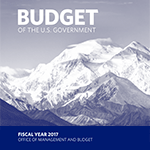 The Budget consists of a collection of documents that contains the budget message of the President, information about the President's budget proposals for a given fiscal year, and other budgetary publications that have been issued throughout the fiscal year. Other related and supporting budget publications are included; these may vary from year to year.

The primary Budget volume is the main overview of the FY 2017 Budget of the President and contains the Budget Message of the President, information on the President's priorities, budget overviews by agency, and summary tables.

Budget FY 2017 - Analytical Perspectives
Analytical Perspectives contains analyses that are designed to highlight specified subject areas or provide other significant presentations of budget data that place the budget in perspective. This volume includes economic and accounting analyses; information on Federal receipts and collections; analyses of Federal spending; information on Federal borrowing and debt; baseline or current services estimates; and other technical presentations. The Analytical Perspectives volume also contains supplemental materials with several detailed tables, including tables showing the budget by agency and account and by function, subfunction, and program, that are available online and as a CD-ROM in the printed document.

Budget FY 2017 - Historical Tables
Historical Tables provides a wide range of data on Federal Government finances. Many of the data series begin in 1940 and include estimates of the President's Budget for 2016-2021. Additionally, Table 1.1 provides data on receipts, outlays, and surpluses or deficits for 1901-1939 and for earlier multiyear periods.