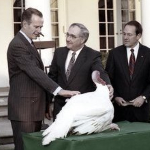 In 1789, per a request by Congressional resolution, President George Washington issued a proclamation for “a day of public thanksgiving and prayer.” In 1863, President Lincoln issued a proclamation making Thanksgiving an official annual holiday to be commemorated each year on the last Thursday of November. To stimulate economic recovery, in 1939, President Franklin Roosevelt moved the holiday to the second to the last Thursday of the month to extend the holiday shopping season. (Source: NARA )

To alleviate confusion, in 1941, Congress passed and President Roosevelt signed into law H.J. Res. 41 (77th Congress) to establish Thanksgiving Day as a legal holiday on the fourth Thursday of November, to take effect the following year. The following are excerpts of remarks from the Bound Congressional Record regarding H.J. Res. 41.

"There appears to be no act of Congress that has ever designated a particular day as Thanksgiving Day... In short, this bill will fix the last Thursday in November as the permanent day for our annual Thanksgiving." Representative Michener, October 6, 1941, Remarks on H.J. Res 41 (77th Congress)

"The rather universal sentiment seems to be that we should return to the old custom of the last Thursday in November as Thanksgiving Day." Representative O’Hara , October 6, 1941, Remarks on H.J. Res 41 (77th Congress)

"...in 1940 the President of the United States...advanced Thanksgiving Day from its traditional date in the calendar to the third Thursday of November... In the House of Representatives a great many thought the Congress should fix definitely the last Thursday in November in each year as Thanksgiving Day, and remove it beyond the power of Executive interference." Senator Danaher, December 9, 1941, Remarks on consideration of H.J. Res. 41 (77th Congress) as reported from Senate the Committee on the Judiciary with an amendment

Although National Turkey Presentation ceremonies have taken place since 1947, in 1989, President George H.W. Bush was the first to actually offer the turkey a Presidential pardon.

"...let me assure you, and this fine tom turkey, that he will not end up on anyone’s dinner table, not this guy—he’s granted a Presidential pardon as of right now..."