Anniversary of the First American Woman to Fly in Space 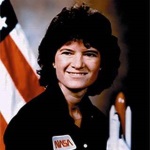 Sally Ride’s pioneering voyage caught the country’s attention, and her life “inspired generations of young girls to reach for the stars” and it "showed us that there are no limits to what we can achieve”.

Sally Ride was born in 1951 in California and graduated from Stanford University with a Ph.D. in physics. At the time of graduation, Ride responded to a newspaper advertisement for applicants to the NASA space program. Out of 8,000 applicants, Ride was one of only 35 chosen to join the astronaut corps.

Upon retiring from NASA in 1987, Ride went on to work at the Stanford University Center for International Security and Arms Control. Later she became a professor of physics at the University of California – San Diego and the director of the California Space Institute. Sally Ride served on numerous boards as well as the commission investigating the Columbia accident. She was the only person to serve on both commissions investigating the Challenger and the Columbia accidents. She also received numerous awards including the Presidential Medal of Freedom and was inducted into the National Women’s Hall of Fame and the Astronaut Hall of Fame.