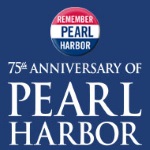 This year commemorates the 75th anniversary of the attack on Pearl Harbor in Hawaii on December 7, 1941. The attack led the United States into World War II.

President Franklin Roosevelt called December 7, 1941, "a date which will live in infamy." On that day, Japanese planes attacked the United States Naval Base at Pearl Harbor, Hawaii Territory. The bombing killed more than 2,300 Americans. It completely destroyed the American battleship U.S.S. Arizona and capsized the U.S.S. Oklahoma. The attack sank or beached a total of twelve ships and damaged nine others. 160 aircraft were destroyed and 150 others damaged. The attack took the country by surprise, especially the ill-prepared Pearl Harbor base.

On August 23, 1994, the United States Congress designated December 7th of each year as National Pearl Harbor Remembrance Day. All American flags should be flown at half-staff until sunset honoring those who lost their lives as a result of the attack on the U.S. Military and naval forces in Hawaii.

Explore the official website commemorating National Pearl Harbor Remembrance Day and the 75th attack on Pearl Harbor. They will be providing updates about Pearl Harbor Historic Sites, programming, workshops, films and live events throughout the year.

Read ”Air Raid on Pearl Harbor”, and view the Naval dispatch sent from the Commander-in-Chief Pacific to all major Navy commands and fleet units announcing the attack on the Library of Congress' website.