Historical Publications about the Panama Canal 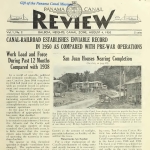 The U.S. Government Publishing Office (GPO) partnered with the George A. Smathers Libraries at the University of Florida (UF) to make digitized versions of publications related to the Panama Canal published by the Panama Canal Commission, its predecessor agencies, and other Federal agencies widely available

About the Panama Canal

Over 100 years ago, an incredible engineering feat, the Panama Canal, officially opened to traffic on August 15, 1914. Called one of the Seven Wonders of the Modern World by the American Society of Civil Engineers, the construction of the Canal removed enough earth and debris to bury Manhattan up to 12 feet. The 52 mile long waterway was completed on schedule and under budget at a cost to the United States of $352 million. The Canal dramatically changed shipping patterns by eliminating the long voyage around the Cape Horn and South America. Ships could now cross from the Atlantic to the Pacific in only 8 to 10 hours. By 1915, over 5 million tons of material passed through the Canal annually. The United States administered the canal and the surrounding Canal Zone until December 31, 1999. (Source: Panama Canal Museum (Source: Panama Canal Museum http://cms.uflib.ufl.edu/pcm/Home.aspx )

The collection contains a variety of publications that give users a glimpse into the workings of the Canal and life in the Canal Zone. Users can now easily read the Canal Record, published weekly between 1907 and 1941 for the employees of the Isthmian Canal Commission and Panama Canal Commission, which contains a wealth of detail on life in the Canal Zone. The August 19, 1914 issue of the Canal Record, for example, contains a description of the first official trip through the Canal, lists of products available at the commissary with prices, rainfall totals for the week, as well information on Canal navigation.

The collection contains a host of other interesting government publications on the Canal. Just a small sampling of those titles include: