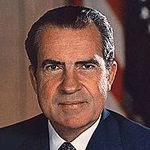 In May 1975, the Watergate Special Prosecution Force (WSPF) decided that it was necessary to question former President Richard M. Nixon in connection with various investigations being conducted by the WSPF. Mr. Nixon was questioned over the period of two days, June 23 and June 24, 1975, and the testimony was taken as part of various investigations being conducted by the January 7, 1974, Grand Jury for the District of Columbia (the third Watergate Grand Jury). Chief Judge George Hart signed an order authorizing that the sworn deposition of Mr. Nixon be taken at the Coast Guard Station in San Mateo, California with two members of the grand jury present.