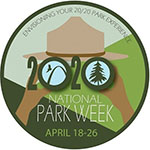 Featured Content April 16, 2020 – A time to celebrate America's treasures, even from home

Each April we observe National Park Week, described by the National Park Service (NPS) as "a time to explore amazing places, discover stories of history and culture, help out, and find your park!" This year's celebration will be observed April 18–26, although NPS recommends checking with individual parks for specific details about park operations during the COVID-19 outbreak. You can also take a virtual tour of a National Park or read on for legislation that established some of our nations' treasures.

Everglades National Park in Florida was established in 1947. In his address on conservation at the dedication of Everglades National Park, President Harry Truman said, “Here is land, tranquil in its quiet beauty, serving not as a source of water, but as the last receiver of it.” Read his full remarks on p.545, Public Papers of the Presidents Collection, Book 01, Presidential Documents - January 1 to December 31, 1947.

In 1994, the California Desert Protection Act was passed to establish both Death Valley and Joshua Tree National Parks. The legislation states that these lands were “increasingly threatened by adverse pressures which would impair, dilute, and destroy their public and natural value.”

The Pinnacles National Park Act which protects mountains in California was signed into law on January 10, 2013.

The most recent to be added to the list of national parks is White Sands National Park in southern New Mexico. It became a national park through Subtitle E of Title XXVIII of the 2020 National Defense Authorization Act, which was signed into law on December 20, 2019. It is the 62nd national park.