Get ready for National Ice Cream Day, Sunday, July 19, with this flavor of ice-cream-related U.S. documents.

President Ronald Reagan designated the third Sunday of July as National Ice Cream Day on July 9, 1984, by Presidential Proclamation 5219, in which he stated:

“Ice cream is a nutritious and wholesome food, enjoyed by over ninety percent of the people in the United States. It enjoys a reputation as the perfect dessert and snack food. Over eight hundred and eighty-seven million gallons of ice cream were consumed in the United States in 1983.”

Do you know the difference between ice cream and frozen custard? According to 21 CFR 135.110, the Food and Drug Administration says it's ice cream if the food contains less than 1.4 percent egg yolk solids by weight; in excess of that, the name of the food is frozen custard.

7 CFR 58.649 outlines physical requirements for ice cream and frozen custard, and 7 CFR 58.2827 provides this as the official symbol for products meeting the U.S. Department of Agriculture's standard for ice cream: 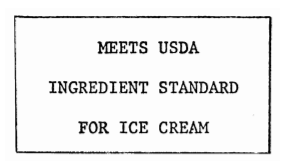 Find out from the National Institute of Standards and Technology how to use the gravimetric displacement method to check the contents of ice cream novelties in NIST Handbook 133: Checking the Net Contents of Packaged Goods, Section 3.11.

See ice cream shops and creameries that have been recognized in the Congressional Record.