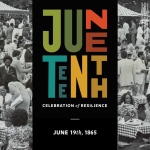 "On Juneteenth, we recommit ourselves to the work of equity, equality, and justice. And, we celebrate the centuries of struggle, courage, and hope that have brought us to this time of progress and possibility. That work has been led throughout our history by abolitionists and educators, civil rights advocates and lawyers, courageous activists and trade unionists, public officials, and everyday Americans who have helped make real the ideals of our founding documents for all."

On June 19, 1865, federal troops arrived in Galveston, Texas to take control of the state and ensure that all enslaved people be freed. This, however was two and a half years after the Emancipation Proclamation went into effect January, 1863. This day, the oldest known celebration commemorating the end of slavery in the United States, has become a day for African Americans to celebrate not only their freedom, but their history, culture and achievements.

It was from the balcony of this house, Ashton Villa, in Galveston, Texas that General Gordan Granger read the order beginning “The people are informed that in accordance with a Proclamation from the Executive of the United States, all slaves are free.” on June 19th, 1865. Photo by Carol M. Highsmith, 2012. Highsmith Archives. Prints and Photographs Division, Library of Congress.

Search govinfo for Presidential Statements and Remarks in the Congressional Record related to Juneteenth.