Construction Began on the First Presidential Library in 1939 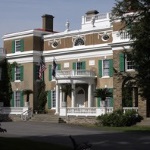 Before the 20th century, presidential papers and records were generally the private property of the President, and many had been lost, sold, or ruined by bad storage conditions.

Seeking a better solution, President Roosevelt established and donated a public repository on his Hyde Park estate to house his documents and artifacts. He raised private funds for the facility, and then turned it over for operation by the United States Government through the National Archives. The Franklin D. Roosevelt Presidential Library and Museum’s cornerstone was laid November 19,1939, and dedicated on June 30,1941.

In 1955, (amended in 1986), Congress enacted the Presidential Libraries Act, establishing a system of privately erected and federally maintained facilities for preserving historical materials of U.S. Presidents.

The presidential library system has historical material for every President of the United States from Herbert Hoover to George W. Bush, and planned for Barack Obama; however there are other libraries and museums established for other presidents prior to Hoover that are not part of the NARA system, which are operated by private foundations, state governments, or historical societies. Unlike other Presidential Libraries, the Barack Obama Presidential Library will be a fully digital library. After the records are digitized, NARA will store and preserve the original materials in an existing NARA facility that meets NARA’s standards for archival storage.


69 Stat. 695 - Joint resolution to provide for the acceptance and maintenance of Presidential libraries, and for other purposes