Sinking of the R.M.S. Titanic 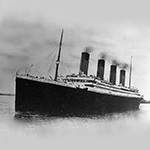 The R.M.S. Titanic was touted as an “unsinkable” feat of shipbuilding. The immense British ocean liner departed Southampton, England for New York City on April 10, 1912. On the fourth day of its maiden voyage, the vessel fatally struck an iceberg. At 2:20 a.m. on April 15, the luxury steamship sank into the North Atlantic. More than 1,500 people died and 703 were rescued.

In the weeks following the Titanic catastrophe, the U.S. Senate convened a subcommittee to investigate the cause of the disaster. After weeks of hearings and testimonials in New York City and Washington, DC, the subcommittee presented its findings and recommendations to the full Senate on May 28, 1912. The final report’s criticism of negligent safety practices led to a number of industry changes.

More than 70 years later, the Titanic gained the attention of Congress once again. The recent discovery of the wreckage site brought concerns about destructive salvaging. Congress moved to designate the site as an international maritime memorial and protect it for scientific research and exploration. President Ronald Reagan signed the R.M.S. Titanic Maritime Memorial Act of 1986 on October 21, 1986.

In 2001, under the authority of that act, the National Oceanic and Atmospheric Administration (NOAA) issued guidelines “developed for future research on, exploration of, and if appropriate, salvage of RMS Titanic.” To this day, the U.S. Government continues to work with other countries to protect and preserve one of the most famous shipwrecks in the world.