A Tribute to Nancy Reagan 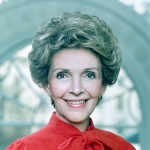 Nancy Reagan was a former first lady of the United States and the widow of President Ronald Reagan. Both Nancy and Ronald Reagan had backgrounds in acting and were married in 1952. She was an adviser to her husband and served as first lady of California before moving into the White House in 1981. Her major initiative was the "Just Say No" drug awareness campaign. When her husband was diagnosed with Alzheimer's disease, she pushed for stem-cell research and, together with the Alzheimer’s Association, established the Ronald and Nancy Reagan Research Institute.

Nancy visited prevention programs and rehabilitation centers throughout the United States and foreign countries. She was the founder of the "Just Say No" campaign and, in 1985, she hosted an international conference on youth drug abuse at the White House.

Life After the White House

Nancy Reagan’s focus as a presidential widow was to bring public attention to her late husband’s legacy. She was involved in the events to honor Ronald Reagan on the 100th anniversary of his birth in 2011. This included officiating the ceremony for the 2010 unveiling of a commemorative Ronald Reagan Centennial U.S. postage stamp.

Nancy Reagan died from congestive heart failure on March 6, 2016, at the age of 94. She was laid to rest beside her husband at the Reagan Presidential Library in Simi Valley, California, on March 11, 2016. 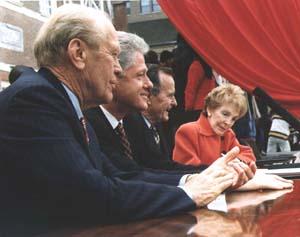 Public Papers of the Presidents of the United States: William J. Clinton, April 28, 1997 (Book I) 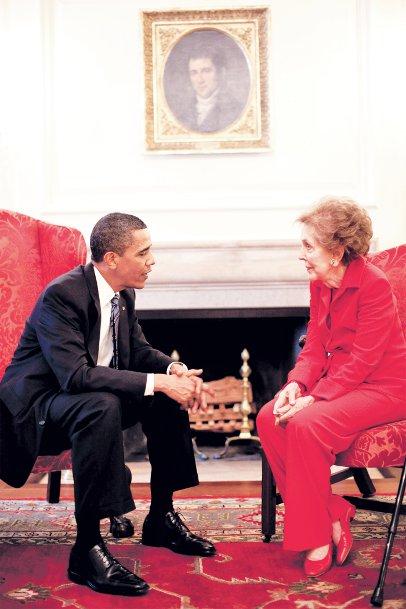 Former First Lady Nancy Reagan meeting with President Obama prior to a bill signing ceremony for The Ronald Reagan Centennial Commission Act in the Map Room at the White House, June 2.

Public Papers of the Presidents of the United States: Barack H. Obama, June 2, 2009 (Book I)