Are You Drone Ready? 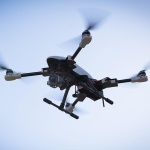 The use of Unmanned Aircraft Systems (UAS), usually referred to as drones, in our nation's airspace is rapidly increasing, raising both opportunities and challenges for public safety and government officials.

On October 5, 2018, President Trump signed the FAA Reauthorization Act of 2018.
The Act establishes new conditions for recreational use of drones and immediately repeals the Special Rule for Model Aircraft. The Federal Aviation Administration (FAA) is evaluating the impacts of this change in the law and how implementation will proceed. In the interim, the FAA is asking the public to please continue to follow all current policies and guidance with respect to recreational use of drones.


Visit the FAA website to stay abreast of current and upcoming laws, as well as view safety tips to help you fly safely in the National Airspace System.

43 CFR § 9212.1 - Prohibited acts
Flying a Drone Near a Wildfire is Breaking the Law. Per the U.S. Code of Federal Regulations, 43 CFR 9212.1(f), it is illegal to resist or interfere with the efforts of firefighter(s) to extinguish a fire.
PDF Details