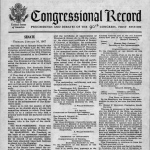 The U.S. Government Publishing Office (GPO), in partnership with the Library of Congress (LC), has made available on govinfo digitized versions of the Congressional Record (Bound Edition) from 1961-1970.

This release covers debates and proceedings of the 87th through the 91st Congresses. Spanning approximately 380,000 Congressional Record pages, this era covers historical topics such as: