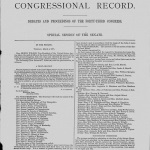 The U.S. Government Publishing Office (GPO), in partnership with the Library of Congress (LC), has made available on govinfo digitized versions of the Congressional Record (Bound Edition) from 1873-1890.

This release covers debates and proceedings of the 43rd through the 51st Congresses and it completes the objective of digitizing all historic issues of the Congressional Record back to the first appearance of this publication on March 5, 1873.

This era of Congress covers historical topics such as: