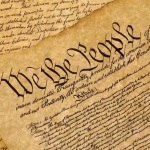 The signing of the United States Constitution on September 17, 1787, by delegates to the Constitutional Convention, established America’s national government and fundamental laws. At the 1787 convention delegates formulated a plan for a stronger government establishing three branches – Executive, Legislative and Judicial – along with a system of checks and balances ensuring no single branch would have too much power.

Facts about the U.S. Constitution: