217th Anniversary of the Establishment of the Library of Congress 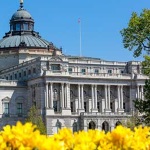 Brief History- excerpt from the Library of Congress "History of the Library" webpage.

The Library of Congress was established by an act of Congress in 1800 when President John Adams signed a bill providing for the transfer of the seat of government from Philadelphia to the new capital city of Washington. The legislation described a reference library for Congress only, containing "such books as may be necessary for the use of Congress - and for putting up a suitable apartment for containing them therein…"

The original library was housed in the new Capitol until August 1814, when invading British troops set fire to the Capitol Building, burning and pillaging the contents of the small library.

Within a month, retired President Thomas Jefferson offered his personal library as a replacement.

In January 1815, Congress accepted Jefferson's offer, for his 6,487 books, and the foundation was laid for a great national library. The Jeffersonian concept of universality, the belief that all subjects are important to the library of the American legislature, is the philosophy and rationale behind the comprehensive collecting policies of today's Library of Congress.

Ainsworth Rand Spofford, Librarian of Congress from 1864 to 1897, applied Jefferson's philosophy on a grand scale and built the Library into a national institution. Spofford was responsible for the copyright law of 1870, which required all copyright applicants to send to the Library two copies of their work. This resulted in a flood of books, pamphlets, maps, music, prints, and photographs. Facing a shortage of shelf space at the Capitol, Spofford convinced Congress of the need for a new building, and in 1873 Congress authorized a competition to design plans for the new Library.

In 1886, after many proposals and much controversy, Congress authorized construction of a new Library building in the style of the Italian Renaissance in accordance with a design prepared by Washington architects John L. Smithmeyer and Paul J. Pelz.

In 1888, General Thomas Lincoln Casey, chief of the Army Corps of Engineers, was placed in charge of construction. His chief assistant was Bernard R. Green, who was intimately involved with the building until his death in 1914. Beginning in 1892, a new architect, Edward Pearce Casey, the son of General Casey, began to supervise the interior work, including sculptural and painted decoration by more than 50 American artists. When the Library of Congress building opened its doors to the public on November 1, 1897, it was hailed as a glorious national monument and "the largest, the costliest, and the safest" library building in the world.

The oldest federal cultural institution in the United States, today's Library of Congress is an unequaled world resource with more than 164 million items on approximately 838 miles of bookshelves, and houses the largest rare book collection in North America, and the world's largest collection of legal materials, films, maps, sheet music and sound recordings.

The Library of Congress is currently housed in three buildings on Capitol Hill, Washington D.C. along with the Packard Campus in rural Virginia which houses the National Audio-Visual Conservation Center. The Library's Capitol Hill buildings are all connected by underground passageways, so that a library user need pass through security only once in a single visit. The library also has off-site storage facilities for less commonly requested materials.

44 U.S.C. 1718 - Distribution of Government publications to the Library of Congress
PDF Details

The Library of Congress, through both the Librarian of Congress and the Register of Copyrights, is responsible for authorizing exceptions to Section 1201 of Title 17 of the United States Code as part of the Millennium Copyright Act.

Search govinfo for other legislative documents pertaining to the Library of Congress.

Did you know that GPO makes select collections available in bulk in a machine-readable format (i.e. XML) via our Bulk Data Repository. View Bill Status Bulk Data on govinfo.


Did you know? Check out more fascinating facts on the Library of Congress' website!