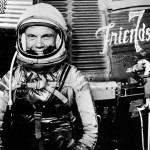 On October 7, 1958, newly formed NASA announced Project Mercury and its objectives to have a piloted spacecraft into an orbital flight around the Earth, observe how a human performs, and safely recover the human and the spacecraft.

After three years of training, on February 20, 1962, former astronaut and Senator John Glenn traveling aboard the Mercury spacecraft, “Friendship 7,” completed three orbits around the Earth lasting approximately five hours. He was the fifth human in space and the third American.

The Mercury-Atlas 6 (Atlas launch vehicle, Mercury spacecraft) mission reestablished NASA as a strong contender in the space race with the Soviet Union, and Glenn became an instant hero.

Later that year, following that successful flight, President Kennedy delivered a speech at Rice University in Houston describing his goals for the nation’s space effort to include landing a man on the Moon and returning him safely to Earth.

John Glenn has been the recipient of numerous commendations as a contributor to the U.S. space program, including being presented the Space Congressional Medal of Honor by President Kennedy and receiving the Presidential Medal of Freedom by President Obama in a ceremony at the White House on May 29, 2012.

Did you know? - Facts about John Glenn

Read the govinfo article ”What’s Next for Nasa” published July 20, 2016, to learn about Congressional Appropriations for NASA in 2017.

123 Stat. 1966 - New Frontier Congressional Gold Medal Act
An act to authorize the President, in conjunction with the 40th anniversary of the historic and first lunar landing by humans in 1969, to award gold medals on behalf of the United States Congress to Neil A. Armstrong, the first human to walk on the moon; Edwin E. ``Buzz'' Aldrin, Jr., the pilot of the lunar module and second person to walk on the moon; Michael Collins, the pilot of their Apollo 11 mission's command module; and, the first American to orbit the Earth, John Herschel Glenn, Jr.
PDF Details

"From Hidden to Modern Figures"

Did you know the movie “Hidden Figures” is based on actual events and profiles the lives of three NASA African American women employees, Katherine Johnson, Dorothy Vaughn, and Mary Jackson, who were critical to the success of the space program?

Katherine G. Johnson, was an African American woman working at NASA as a mathematician who calculated flight trajectories and flight emergency back-up paths for Project Mercury which launched John Glenn into orbit on February 20, 1962.

Read more about these “hidden figures” as well as NASA’s “modern figures,” and how NASA is embracing diversity and inclusion in their “From Hidden to Modern Figures” website resources.

Explore NASA’s John Glenn Video Gallery to watch “The John Glenn Story” as well as view footage of his historic flights and tributes to the former astronaut.

Read about the history of NASA, and follow NASA’s plans to journey to Mars.

Learn more about NASA’s education program and projects and stay up to date with the latest information on NASA’s space program on NASA’s website.