Anniversary of the Americans with Disabilities Act of 1990 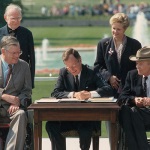 July 26, 1990, President George H. W. Bush signed into law the Americans with Disabilities Act which was the first comprehensive civil rights law addressing the needs of people with disabilities.

September 25, 2008, President George W. Bush signed the ADA Amendments Act of 2008 (ADAAA) to become effective January 1, 2009. This expanded coverage by making significant changes to the ADA’s definition of disability, broadening the scope of coverage under the ADA and Section 503 of the Rehabilitation Act.

March 25, 2011 the U.S. Equal Employment Commission published final regulations implementing the ADA Amendments Act of 2008 (ADAAA). This summary provides an overview of key provisions in the final ADAAA regulations, giving employers an understanding of the changes and how to adapt strategies to minimize liability.

Get more information and technical assistance on the Americans with Disabilities Act from the Department of Justice’s ADA website.