Anniversary of the Disappearance of Amelia Earhart 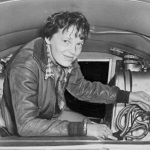 "While she was lost at sea, that wasn’t the end of the Amelia Earhart story... Amelia’s legacy soars as high as ever as she continues to inspire new generations of women to reach for greater heights."

July 2, 2018, marked 80 years since the disappearance of Amelia Earhart and her navigator, Fred Noonan. Amelia Earhart is one of the most famous women in the history of the United States, and her mysterious disappearance cemented her place in history. Earhart rose to fame in the early 1900s becoming one of the most recognizable faces in the early days of aviation. Earhart was known for her fearlessness and the fact that she was not afraid to match the astonishing feats that the early pioneers of air travel were accomplishing at the time.

In 1928, Charles Lindbergh shocked the world by completing the first solo flight across the Atlantic Ocean. His success and notoriety inspired many in the aviation field, but one of the most notable people who were driven by that achievement was Amy Phipps Edward. Phipps Edward was the daughter of Andrew Carnegie’s main business partner and friend, and married Winston Churchill’s cousin. She decided to contract pilot Wilmer Lower Stultz and mechanic Louis Edward Gordon to fly her recently purchased Fokker F.VIIb/3m airplane which she named “Friendship.”

After considerable conversation with family and friends, Phipps Edward decided not to be the passenger to become the first woman to successfully fly across the Atlantic Ocean. She instead decided to hire a female with pilot experience who fit a particular mold. Earhart was chosen to ride as a passenger on the flight, although she was designated the Aircraft Commander by the terms of the contract. She would go on to be the first woman to fly the Trans-Atlantic flight, and would vault to the front page of the Nation’s attention.

Earhart would go on to continue to impress the Nation, earning the media and the public’s attention with her unique personality and likeness to Lindberg. She was coined “Lady Lindy” by the American press, and went on a lecture tour from her return to America in 1928 to 1929. She met her husband, George Putnam, when he helped her publish and write her journal of the experience titled 20 Hrs. 40 Min.: Out Flight in the Friendship. Her notoriety continued to push her towards new goals and eventually led to the ill-fated decision to attempt an around-the-world flight with navigator Fred Noonan.

Earhart and Noonan would successfully make it from America to Lae Airfield in Papa New Guinea where they took off on July 2, 1937 for the tiny strip of land known as Howland Airfield in the middle of the Pacific Ocean. Heavy clouds would cause them to lower their altitude, and obscure their visual navigation. During their final radio contact with the U.S. Coast Guard Cutter Itasca, Earhart said that the plane was running out of fuel and had only a half-hour flight time left. She then said the plane was flying only 1,000 feet high and looking for a visual confirmation of the ship, but was unable to find them or their landing strip. Their final location dictated over the radio was about five nautical miles off from Howland Airfield, and they were not aware that they had the wrong location.

The official search efforts of the U.S. Coast Guard and U.S. Navy lasted until July 19, and were fruitless. No physical evidence was ever found of the plane or the missing pilot and navigator. The notoriety of the trip and its pilot made the story of their disappearance into instant lore and has been spawning speculation and wild theories ever since.
Source: History.com