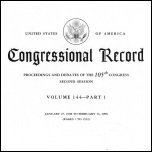 The U.S. Government Publishing Office (GPO), in partnership with the Library of Congress (LC), has made available on govinfo digitized versions of the Congressional Record (Bound Edition) from 1991-1998.

The release will cover Records appearing during the 102nd through the 105th Congresses (1991-1999), an era which saw the first Gulf War, the election and reelection of President Bill Clinton, enactment of the Family and Medical Leave Act, the Brady bill, and NAFTA, Republicans gaining control of both the House and the Senate for the first time since 1954 and the pursuit of their agenda based on the Contract with America, and the impeachment of President Clinton.