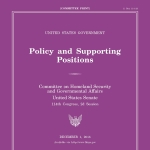 
About the Plum Book

Published by the Senate Committee on Homeland Security and Governmental Affairs and House Committee on Government Reform alternately after each Presidential election, the Plum Book lists over 9,000 Federal civil service leadership and support positions in the legislative and executive branches of the Federal Government that may be subject to noncompetitive appointment, nationwide. The duties of many such positions may involve advocacy of Administration policies and programs and the incumbents usually have a close and confidential working relationship with the agency or other key officials.

The list originated in 1952 during the Eisenhower administration. For twenty-two years prior, the Democrats controlled the Federal Government. When President Eisenhower took office, the Republican Party requested a list of government positions that President Eisenhower could fill. The next edition of the Plum Book appeared in 1960 and has since been published every four years, just after the Presidential election.